At least 20 people were burnt alive on Friday in Imo State after an 18-seater bus conveying passengers from Orlu town to Owerri, the state capital, had a head on collusion with a petrol tanker.
Eyewitnesses said that the petrol tanker conveying diesel lost control before colliding with the bus. The sad incident occurred at Njaba bridge along the Owerri-Orlu expressway.
Writing on Facebook, Ben Eziefule said: “Over 20 people lost their lives Now at Njaba bridge when a trailer conveying Diesel lost control, had a head on collision with 18 seater bus and the occupants got burnt.”
Another eyewitness, who gave his name as ikechukwu, disclosed that immediately the two vehicle collided, the petrol tanker exploded burning the eighteen passengers to death.

He said “it was a black Friday as more than twenty people died in an accident between a tanker carrying diesel and an 18 seater bus.
The bus burnt beyond recognition, all the passengers were roasted alive except one woman who miracles survived.”
The tragedy caused serious traffic gridlock in the area, as villagers, co-travelers and the men of Road safety corps were battling to rush the survivors to hospital and to clear the road for free flow of traffic. 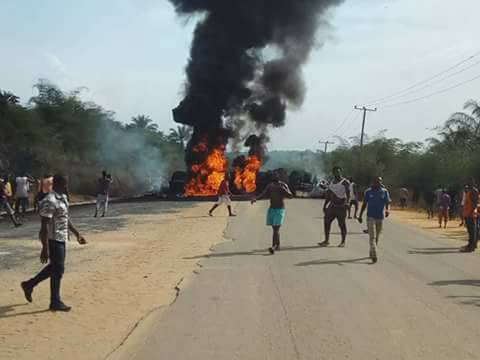 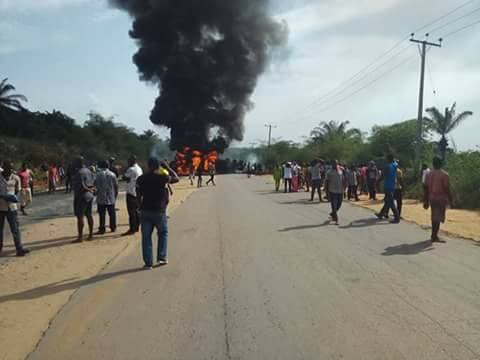