Argentine football star, Lionel Messi’s statue has been vandalised in the capital, Buenos Aires.
According to a BBC report, the bronze statue was chopped off just above the ankles, with the main “body” left lying on the pavement.
It is the second time the statue, which was unveiled in June 2016, has been targeted by vandals. Police said the motive was unclear.
Messi recently saved Argentina’s 2018 World Cup place when he scored a hat-trick against Ecuador in October.
Argentine media tweeted pictures of the vandalised statue.
The statue was unveiled in June 2016 on Paseo de la Gloria, where casts of other famous Argentine sports stars such as tennis player Gabriela Sabatini and basketball player Manuel Ginobili are also on display. 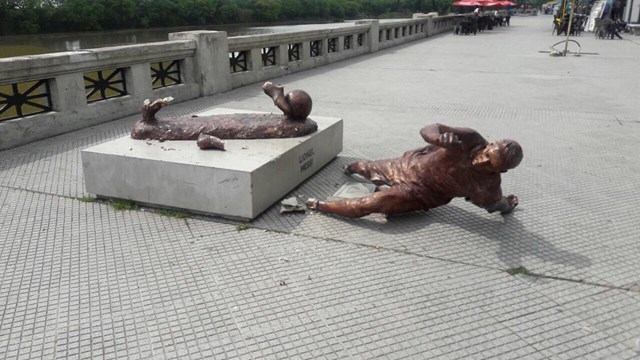 The statue was left lying on the ground
The space was created in preparation for the Olympic Youth Games which will be held in Buenos Aires in 2018.
It has attracted vandals and thieves before, such as in January of this year, when the Messi statue was cut in half at the waist.
Messi, who left Argentina in 2000 to play for Barcelona, has in the past come under criticism for his performance in the national team.
While he has won four European Cups, eight league titles, five Ballons d’Or and three Club World Cups, Messi has not won a World Cup.
His only international honour has been an Olympic gold at the 2008 Games in Beijing.
Argentine football fans were ruthless in their criticism when he missed in a penalty shootout against Chile in the Copa America final in June 2016.
Facebook Comments